Here at Spa Motorcycles we are addicted to Classic restorations. Our technicians Rob Pemberton and Mick Potter have completed over 80 partial restorations in the last few years, including Engine rebuilds, wheel building , carburettor modifications and exhaust upgrades. Full restorations can take six months and we’ve done over 20 of them now. We’ve got a real passion for keeping old bikes on the road. For a job to be successful, in our eyes the finished bike doesn’t just need to look good, it needs to ride well too. Below you will find a few examples of our recent restorations. We also recently featured in ‘Bike Magazine’, click the button below for the full article.

"I don't often write reviews but I feel compelled to sing the praises of the team at Spa Motorcycles. As the owner of a rare imported motorcycle I need to rely on a dealer who is prepared to take on the challenge of keeping it on the road for me. This involves hours of research and having to improvise when the parts required are not available. The skills and knowledge they have are second to none and when they need to dig deeper they know exactly where to go. The end result is that I am able to enjoy riding a motorcycle that would otherwise have become an expensive ornament. The prices are reasonable too so if you have a bike that differs from the norm don't hesitate to give Spa a call because they will be able to get you up and running again."
Mark Townsend
Customer This silver RD350B was collected from a barn in October 2015 after sitting forgotten for 25 years, and completely restored over a period of 6 months. With a very specific brief from the customer ( a local GP who owned one back in the Late 70’s )… he had inherited the bike from a Relative, so there was a sentimental attachment.

He wanted a Cafe Racer inspired minimalistic resto’ that he could ride normally, carry a pillion or Spank around @ speed. Black rims, Race engine & expansion exhaust pipes, but with some original Patina on the panels (ie keep original paint).

We managed to find a matching Silver side panel to replace an odd orange panel which came on the bike & the rest of the paintwork ,fuel tank & oil tank were treated to a good clean with a cutting compound , which did the trick & delivered the required result .. Shiny but original ( incl. a little rusty patina).

A few pics from a modified Yamaha TZR250 2MA 1987. Robe (Technician) restored this a few years back… and decided to re-visit it this summer. 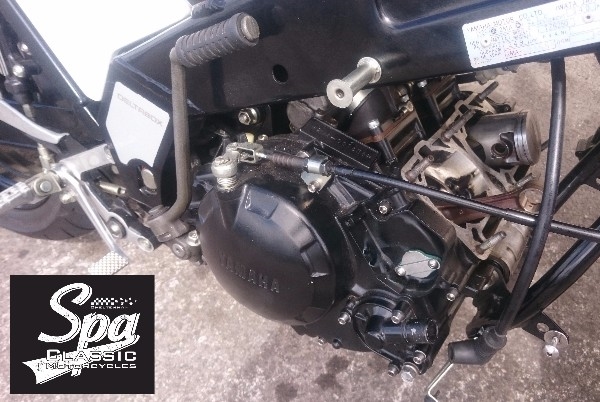 This is an example of the very popular RD400 F we worked on earlier in the summer.